The Talyllyn Railway Is a narrow gauge line using steam locomotives on all advertised passenger trains. It was opened in 1865 and runs inland from Tywyn on the Mid Wales coast to Nant Gwernol. Much of the railway is within the Snowdonia National Park with waterfalls at Dolgoch and walks at Nant Gwernol.

In 1950 the railway was saved from closure by the Talyllyn Railway Preservation Society – the first such organisation in the World. The railway is now strongly supported by the Society whose members provide the train crew and station staff required to operate the line. Members also assist with maintenance work and with many other activities. Details of membership are available on request.

Gleaming paint polished brass and the sounds of steam trains are to be found here in this display of narrow gauge railways. Locomotives, wagons, signals, signs, brassware and other artifacts combine to make a fascinating experience for expert and casual visitor alike.

Narrow gauge railways are highly individual, being designed to suit the areas in which they were built. When minerals such as slate, coal, iron ore, stone or clay were to be moved they came into their own. Some were used for decades for mineral traffic only but often in highly scenic parts of the country passenger services were developed to meet the needs of tourists. Others were built from the start as general carriers of passengers and goods. Our collection includes six steam locomotives and a host of other items from the British and Irish narrow gauge lines.

A special exhibition from May 2000 tells the story of the Talyllyn Railway Preservation Society, the first volunteer group in the world to run a public railway. The Museum is a must for school groups and all who want to broaden their knowledge of the little railways which served the remoter parts of the land and our great industries from the eighteenth century to the present time.

Come early and enjoy a visit to the Museum before your train trip, take time to visit after your train ride or break your round trip here. Even when the trains are not running the museum can be opened by arrangement.

The main terminal station of the railway conveniently situated for car park, bus services and the Main Line station in Tywyn. Facilities include toilets, refreshments, Railway Shop and the Narrow Gauge Railway Museum.

A small station serving the eastern end of Tywyn. It is also the operational centre of the railway. Here are situated the locomotive and carriage sheds together with the engineering workshops. Walks.

A charming little station in delightful surroundings. As well as serving the local hamlet and adjoining caravan and camping park the station is a good starting point for mountain walks.

Another starting point for walks.

Another station in delightful surroundings and a popular place for passengers to stop off awhile to visit the Falls. There is direct access from the station to the Falls area where up to two hours can be spent in exploration. Why not break your Journey here, train service permitting? There is a free car park nearby, and there are picnic tables in the station area. New toilet facilities. Walks.

The main Inland station and the starting point for many passengers as there is no road access to our terminus at Nant Gwernol Station facilities include a refreshment room, shop and toilets. Picnic tables are provided on the station platform and there is a free car park nearby. Abergynolwyn station is the starting point for a forest walk.

The station, situated in a natural ravine, has no road access ills the starting point for walks which enable visitors to explore unspoilt woodland and mountain waterfalls and see something of the former slate mining activities in the area, returning to either Nant Gwernol or Abergynolwyn Stations. All walks are well signposted. 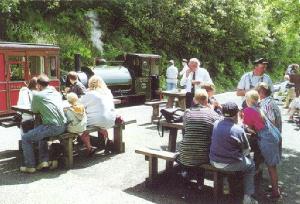